This easy, five ingredient Cherry Cheesecake Ice Cream is cool, creamy and packed with flavor. This no-churn treat features a vanilla cheesecake base that’s loaded with juicy cherries. And best of all, it’s made without an ice cream maker! 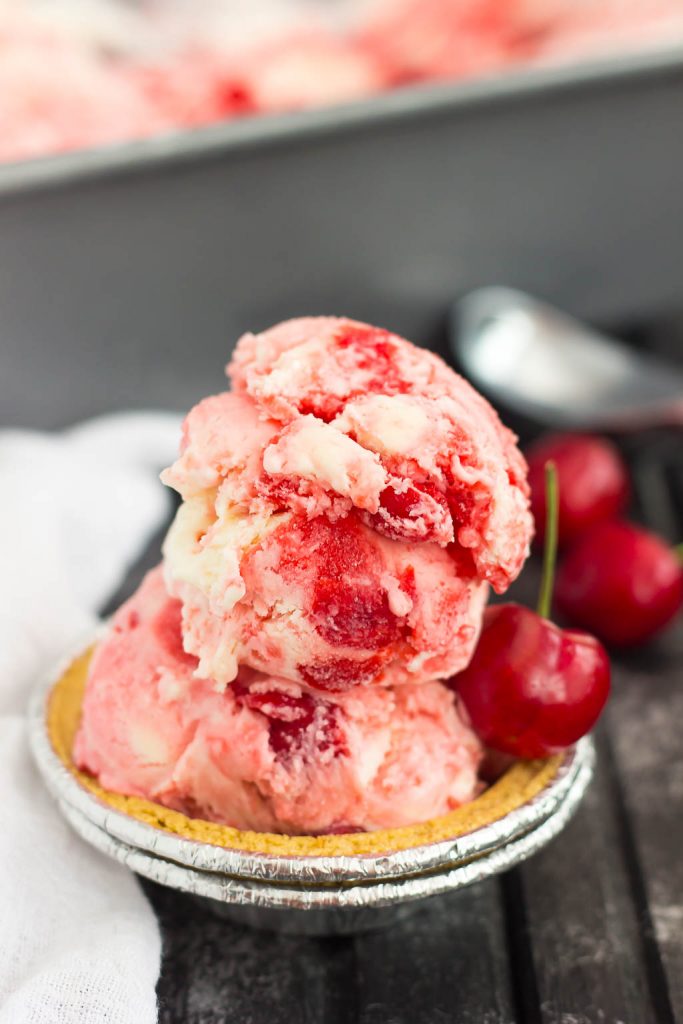 Do you ever have one of those days where you just crave ALL the junk food?

Potato chips, pretzels, cookies, ice cream…pretty much anything and everything but a normal, balanced meal?

I will be the first one to raise my hand and admit this. And I’m not much of a snacker, but ever since I started blogging full-time, I feel like my eating habits are out of whack.

I often make savory dishes and desserts in the morning, just so I can get that perfect glow of sunlight for when I photographing recipes. And that often starts out my day on the wrong track. I’ll have some coffee and yogurt for breakfast, but by 10am, I’m often indulging in some sweet treats or late-night snacks…you know, recipe testing to make sure everything turns out to my specifications.

But, it could be worse, right? After all, I get to make recipes and share them with you for a living. I really do have the best job, even if I do eat ice cream as soon as the sun comes up.

And since summer is in full bloom, I’ve been craving ice cream like crazy. I’ve mentioned this before, and I’ll say it again, but the hubster is an ice cream fanatic. It’s safe to say that you can find at least a gallon (or three) of ice cream stocked in our freezer at all times. The hubster often indulges in bowl as a late night treat, no matter the weather or season. But come summer, his cravings really kick into gear. That’s what the warm weather will do to you, right?

Since I love creating new recipes and you also love my no-churn ice creams (remember this Pumpkin Caramel Ice Cream from last fall?), I decided to whip up another batch that just screams summer and all things cool and creamy.

This easy, five ingredient Cherry Cheesecake Ice Cream is cool, creamy and packed with flavor. This no-churn treat features a vanilla cheesecake base that’s loaded with juicy cherries. And best of all, it’s made without an ice cream maker! 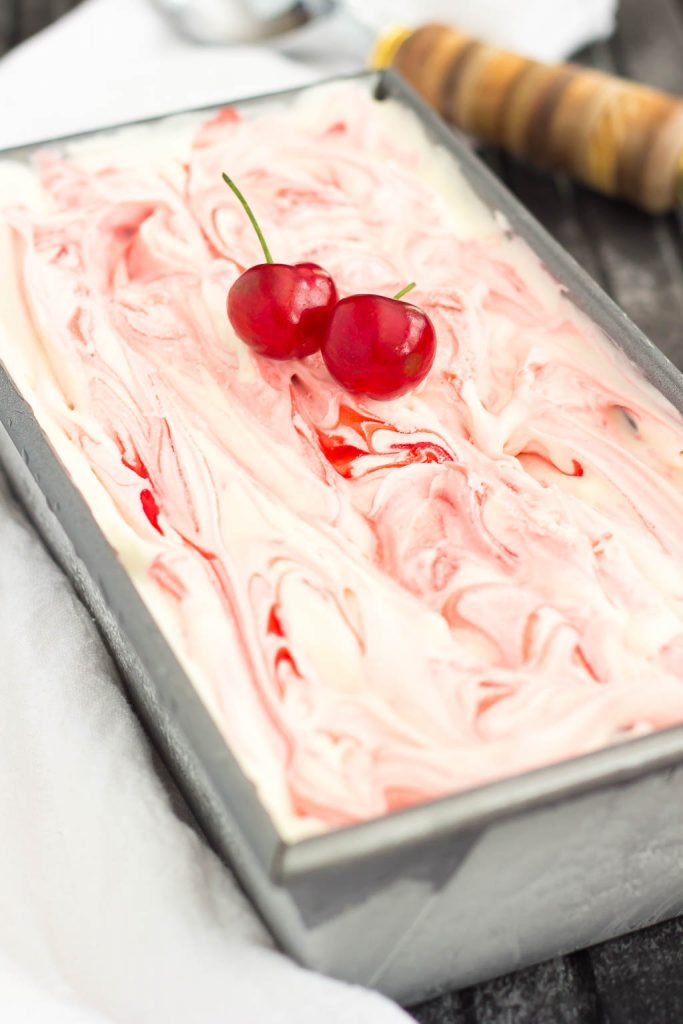 If you’re craving ice cream, but don’t feel like reaching for the store-bought kind, then this no-churn ice cream was made for you. With just five ingredients and a few minutes of prep time, you can have this ice cream made and ready to freeze in no time.

And did I mention that it taste just like cherry cheesecake? Pretty much the best flavor ever, right? Well, unless you count this oreo kind or that strawberry peanut butter version. But, we’re talking cheesecake, and cherry cheesecake ranks high up there with me.

This No-Churn Cherry Cheesecake Ice Cream is bursting with a swirls of cream cheese and tangy cherries. And it’s pretty rich, too. A scoop or two goes a long way, with its decadent taste and burst of flavor. One bite, and you’ll feel like you’re eating cheesecake, in ice cream form.

And if you really want to get fancy, serve this ice cream in a mini graham cracker pie crust. Cheesecake perfection right there!

So grab those ingredient and whip up this simple, No-Churn Cherry Cheesecake Ice Cream! It’s perfect to enjoy all summer long! 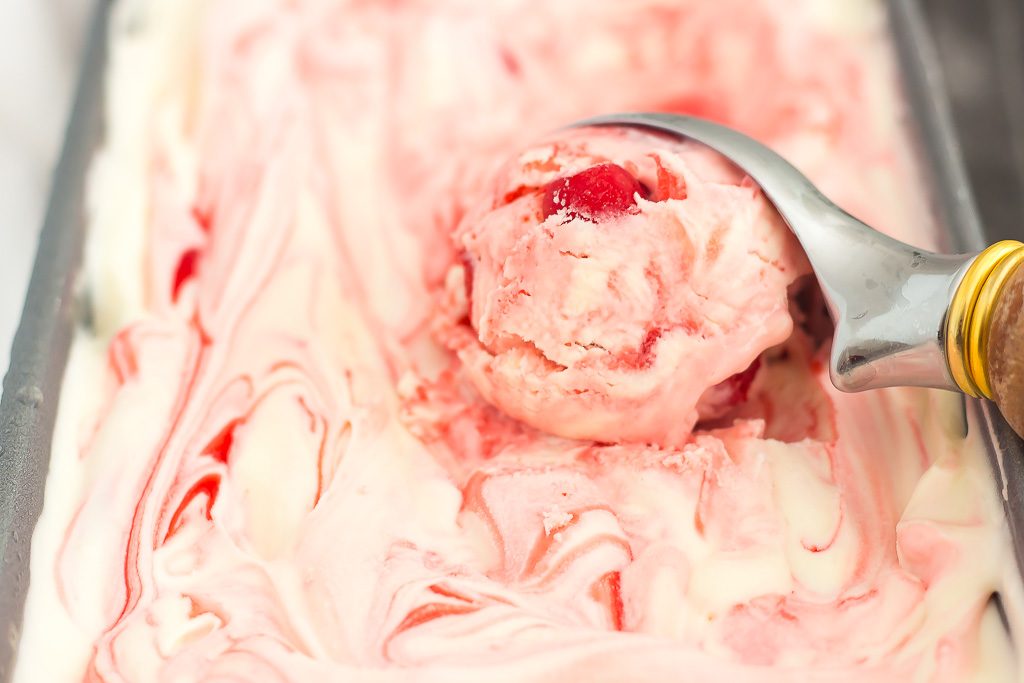 Looking for more frozen treats? I’ve got you covered! 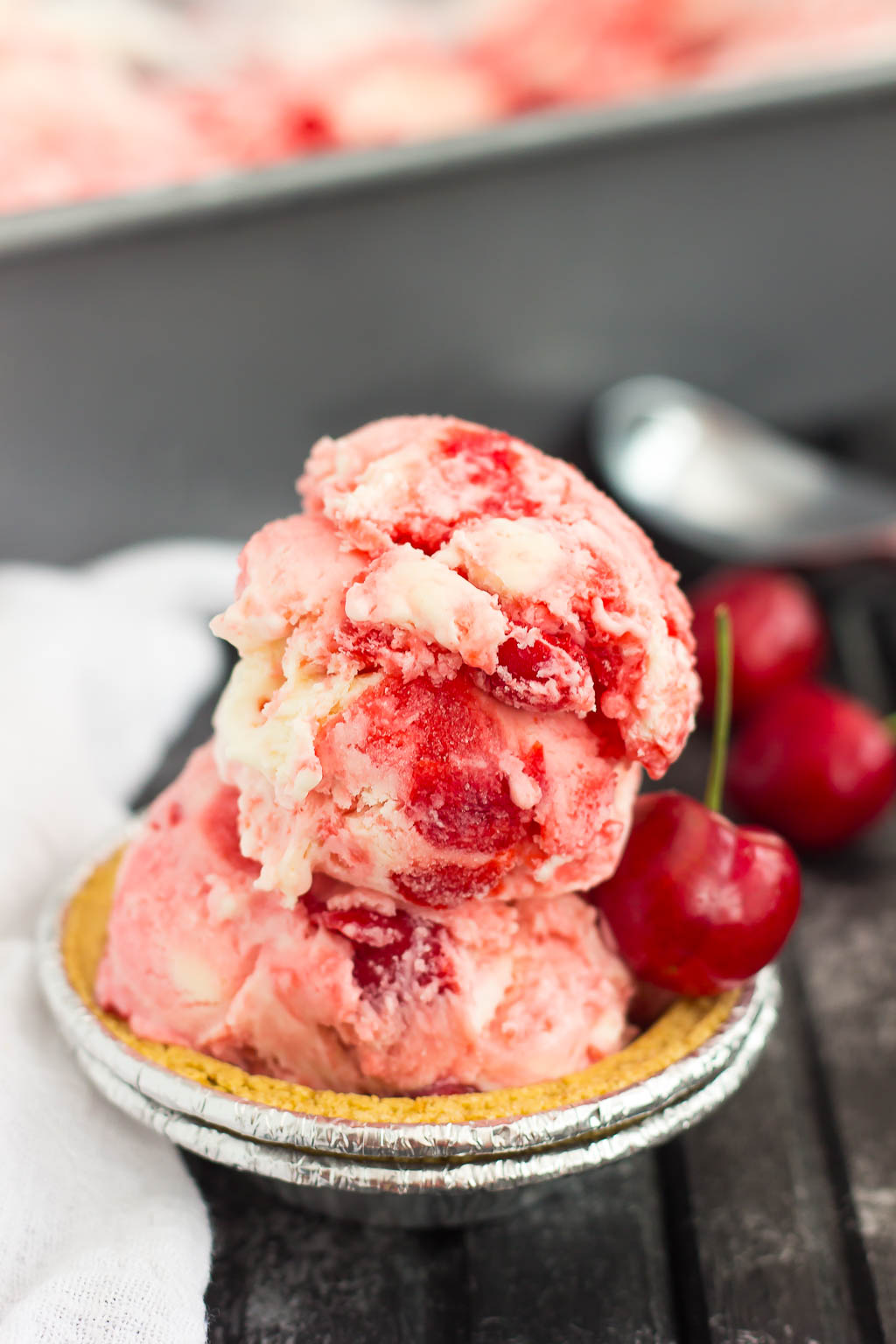