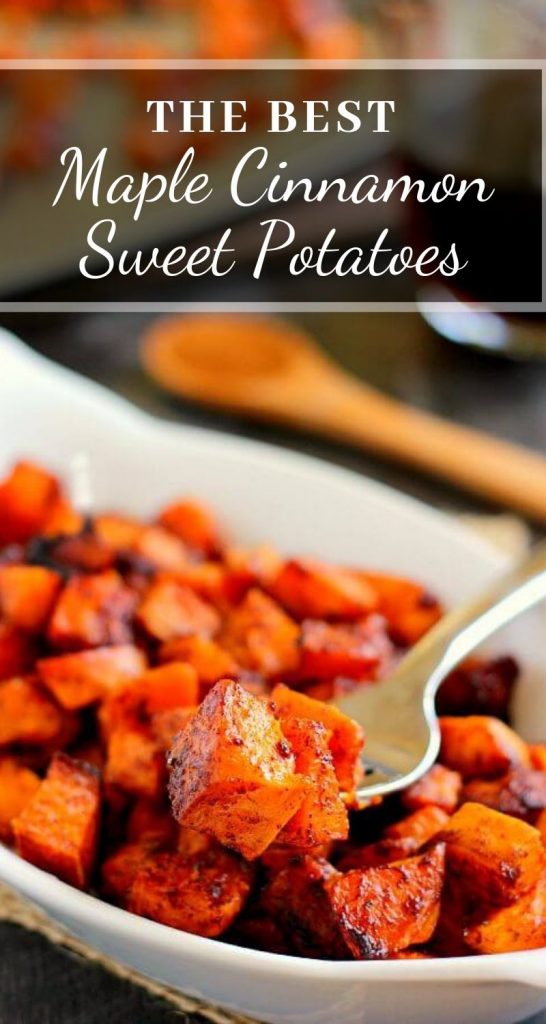 These Roasted Maple Cinnamon Sweet Potatoes are seasoned with cozy flavors and roasted to perfection until crispy on the outside and soft on the inside! 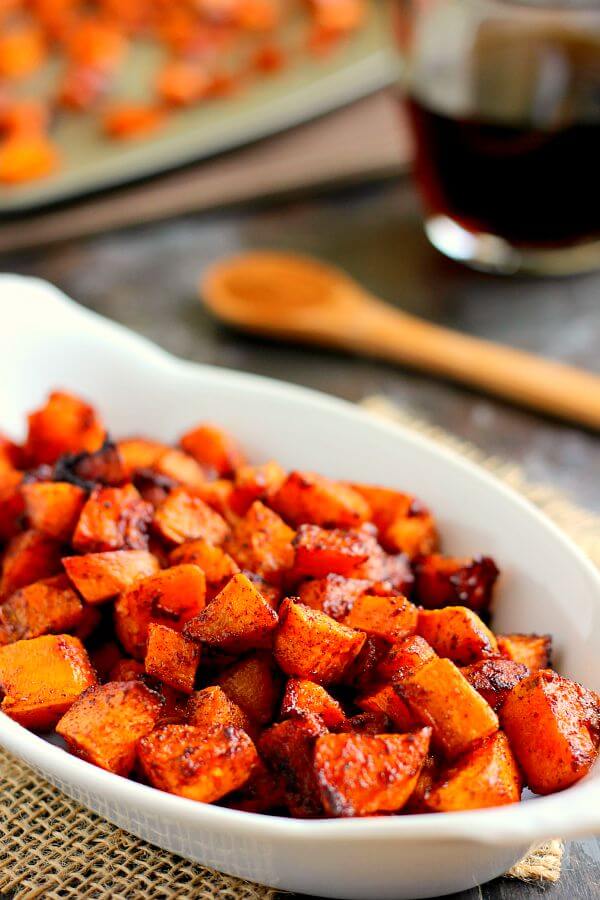 It’s confession time Thursday, friends. Remember how I confessed a while ago that I don’t like marshmallows and love pound cake but never shared a recipe? You’ve forgiven me for that, right? Ok, good, because it gets better (or worse) depending on how you look at it.

Brace yourself. I never used to like sweet potatoes. Like never, ever. Not even a little bit, unless you count the baked sweet potatoes from Outback Steakhouse where they load it, and I mean LOAD it, with butter, cinnamon and brown sugar. Then I could eat it because it basically tasted like cinnamon-y sugar fluff.

I wouldn’t go near sweet potatoes at Thanksgiving, and the thought of the little marshmallows nestled on top was enough to make me gag. Ok, that still could make me gag since I don’t really like marshmallows. But anyways, I think you get the point.

Now, I know that are probably some of you out there that are in the same boat as me. The hubster doesn’t like sewet potatoes, either, and shared my feelings for them…until recently, that is. 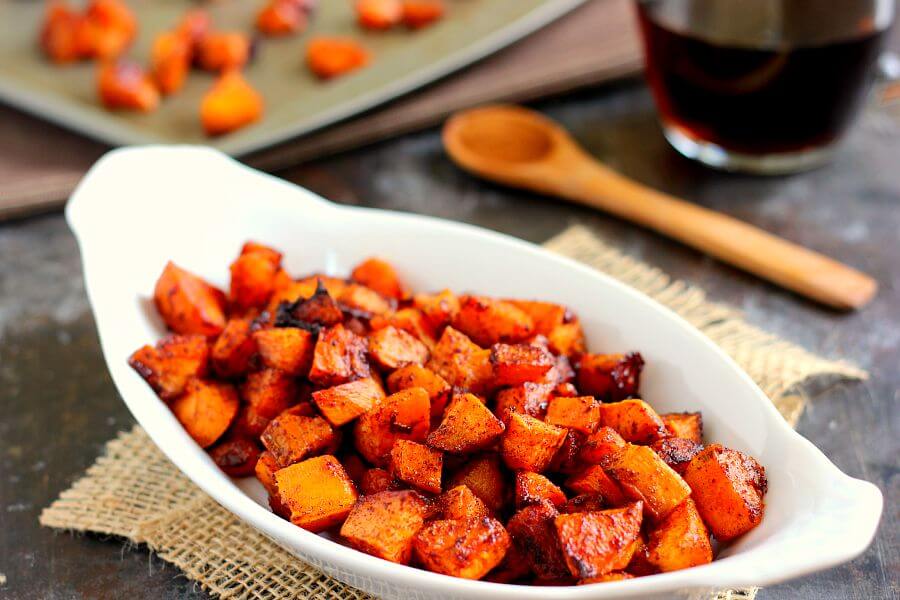 Within the past several years, sweet potato fries became all the rage. Fast food places, bars, and restaurants started serving up these fries like there was no tomorrow. And I have no idea how I ended up tasting one, but once I did, I was hooked. On sweet potato fries, that is.

Up until recently, I still wouldn’t try a regular sweet potato. The smell and texture (yes, it has a different texture than the regular kind) were sort of a turn-off for me. But then I got to thinking that I might actually enjoy the potatoes if they were covered with maple and cinnamon. You know, kind of like a skinnier version of Outback’s sweet potato.

Well, friends, I’m hooked. These Roasted Maple Cinnamon Sweet Potatoes are seasoned with cozy flavors and roasted to perfection until crispy on the outside and soft on the inside. They’re easy to prepare and packed with flavor. And even if you’re a sweet potato hater, I guarantee you’ll love these roasted sweet potatoes with maple syrup and cinnamon.

And trust me when I say that these Roasted Maple Sweet Potatoes are good. And when I say good, I mean melt-in-your-mouth, finger-lickin’, fall-flavors-in-a-bite good! 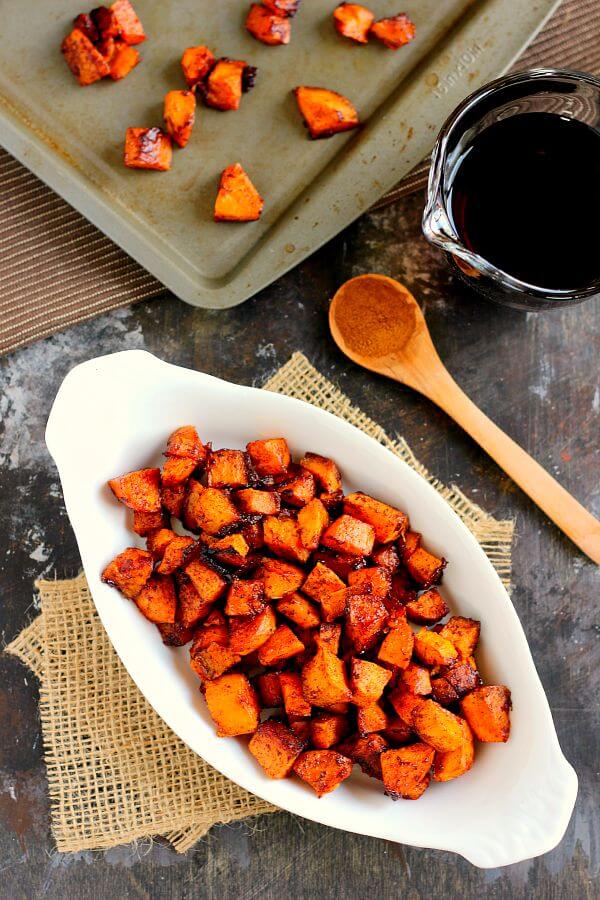 The baked sweet potato cubes are tossed in a glaze consisting of olive oil, maple syrup, cinnamon, salt and pepper. Spread those cuties onto a baking pan and roast in the oven until their skin is slightly crisp and browned. Once you bite into these babies, you’ll be a sweet potato lover forever. And if you’ve already loved sweet potatoes from the beginning, then you’ll have found a new favorite recipe.

Here’s what you’ll need to make these sweet potatoes with maple syrup and cinnamon: 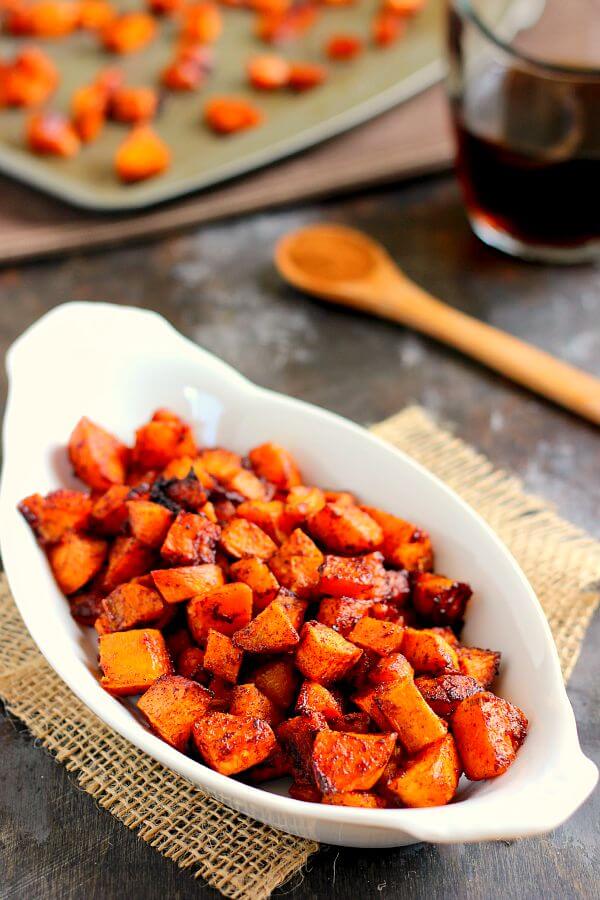 So easy to make and bursting with flavor, it’s hard not to love these maple roasted sweet potatoes! The spices make your house smell amazing and the flavor, well, that’s a winner for sure. Even the hubster liked them, so I knew these were good!

These cinnamon roasted sweet potatoes need to cook at 400 degrees F for 30 to 35 minutes.

Can I Prep Cinnamon Sweet Potatoes in Advance?

A few readers have asked if they can prep these maple roasted sweet potatoes, wrap them up, and then reheat them later for a potluck or family gathering. I haven’t tried making these cinnamon maple sweet potatoes ahead of time, as I usually serve right away, but I wouldn’t see why that wouldn’t work! I actually like to eat them cold or at room temperate.

I’m sure you could always put them in the oven on warm if needed! 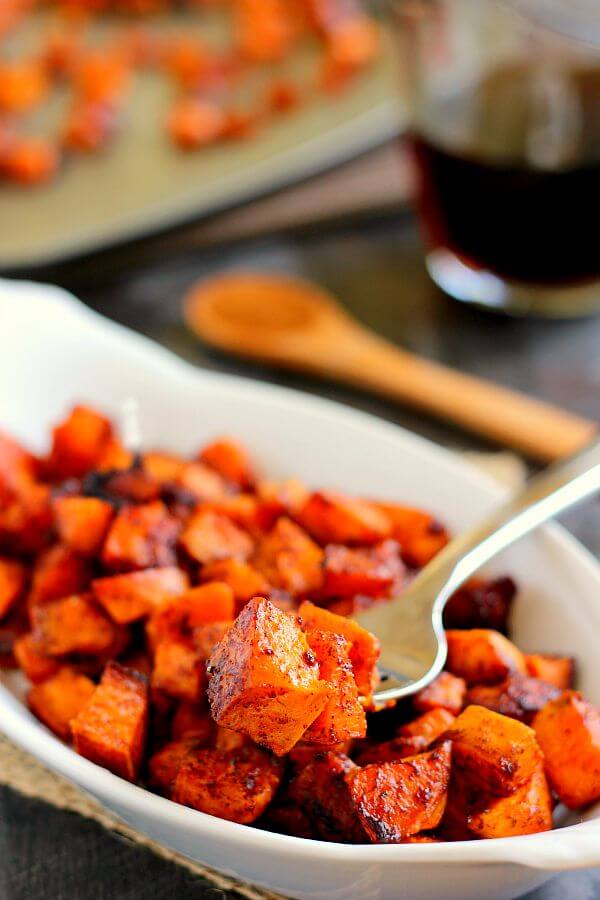 Looking for more sweet potato recipes? I’ve got you covered!