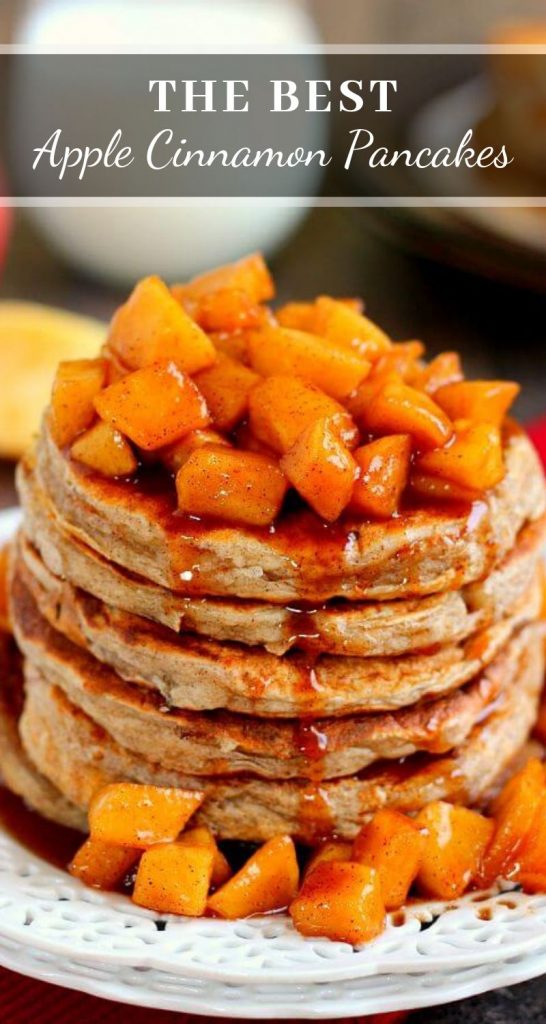 These easy and healthy Apple Cinnamon Pancakes are jam-packed with fresh apples, sweet cinnamon, and Greek yogurt. Diced apples are caramelized with brown sugar to add the perfect touch to these light and fluffy pancakes, providing a deliciously sweet apple glaze! It’s the perfect recipe for a fall breakfast! 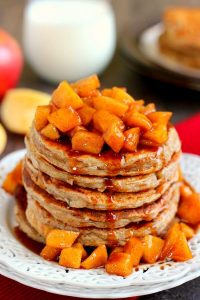 One of the best things about apple season is that I can shove all things apple-icious in your face and that’s acceptable, right? Ok, I promise that I won’t get too crazy with apple recipes, though I am excited to share with you some delicious sweet and savory dishes that I whipped up.

And another thing about apples…I know they’re in season in the fall, hence all the apple rage then (and pumpkin, let’s not forget about pumpkin!), but I actually enjoy apples all year long, and I have a feeling that you do, too.

Even though they’re at their freshest in the autumn, especially since you can go to apple orchards and pluck them right off the trees, I often buy year-round because it’s the perfect fruit for a quick mid-morning snack or post-workout treat.

But with that being said, you just can’t beat a fresh, crisp apple. One that’s perfectly round, no brown spots, and has the perfect crunch when you bite into it. Know what I mean? I love apple season for that very reason. You just can’t get that kind of freshness when it’s snowing outside. At least not in the midwest! Which brings me to these tasty and oh-so fresh Apple Cinnamon Pancakes.  Jam-packed with fresh apples, sweet cinnamon, and Greek yogurt, these pancakes are light, fluffy, and bursting with flavor! The caramelized apples add the perfect touch to these pancakes, providing a deliciously sweet apple glaze.

I don’t make pancakes all that often, but when I do, you can be sure that they’re loaded with flavor and on the healthier side, too. Ever since I made these Blueberry Greek Yogurt Pancakes, I was hooked on the fresh taste and protein-packed ingredients. It quickly became one of my most popular recipes and I can definitely see why.

So I decided to make the same base for these Apple Cinnamon Pancakes and give them a fresh, fall twist.

And let’s not forget about my favorite part, the caramelized apple topping! Man, oh man, is it good! Fresh apples are coated in brown sugar and cinnamon, then swirled with maple syrup. This topping says it all, guys. Add a good amount to the top of these pancakes, and your breakfast is served. Mmm-mmm is it good!

What Makes These Apple Cinnamon Pancakes So Great 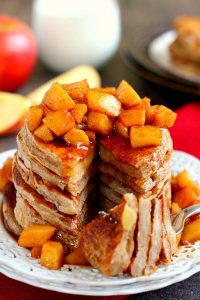 These apple pie pancakes are a breeze to make. The apple topping adds on a little cook time, but not much! Here’s what you’ll need to make this apple cinnamon pancake recipe: 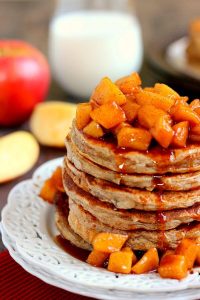 How to Make Apple Cinnamon Pancakes

These Apple Cinnamon Pancakes are so easy to make, that you can have breakfast prepped and ready in about a half hour. And that’s a winner in my book! These pancakes taste delicious on those cool, fall mornings and even work as a great dinner! 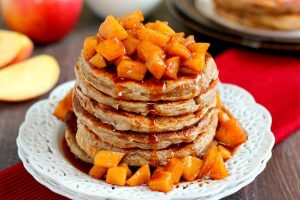 How to Freeze and Reheat Apple Pie Pancakes

To freeze, let the apple pancakes cool completely. Lay out on a baking tray and freeze until hardened. Once hard enough to stack, seal inside a freezer bag. To reheat, toast in a toaster or gently warm in the microwave.

Looking for more fall breakfast recipes? I’ve got you covered!

Did you make and love this recipe? Give it your review below and make sure to follow along with me on facebook and instagram to get other great recipe ideas! 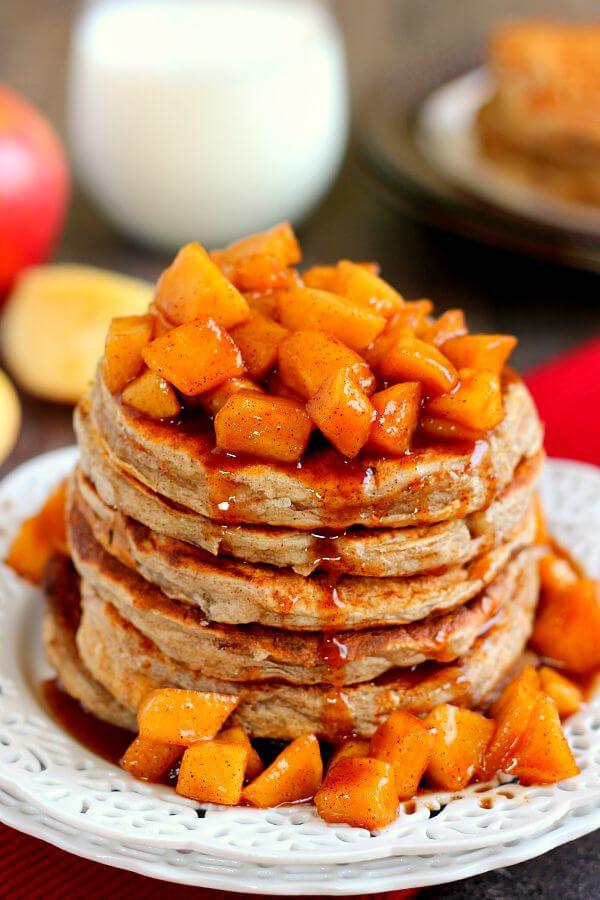